The next stage of the America's Cup World Series will be taking place in Venice from 15th to 20th May in front of the magnificent St. Mark’s Square. Aboard the French one-design boat, there will be a switchover between Yann Guichard and Loïck Peyron with the latter back at the helm of the Energy Team AC45. Loïck Peyron, who arrived in the City of Canals on Tuesday, will be in charge of the boat, while Yann Guichard takes over as coach. Since arriving in Venice, the French team has been based in the old Venice Yacht Club on St. George’s Island. As for the crew, the line-up will be as follows: Loïck Peyron (skipper-helmsman), Arnaud Psarofaghis (wing trimmer), Christophe André (Bowman), Devan Le Bihan (Midbow) and Arnaud Jarlegan (headsail trimmer). Loïck Peyron tells us more about what we can expect during the forthcoming week in Italy. 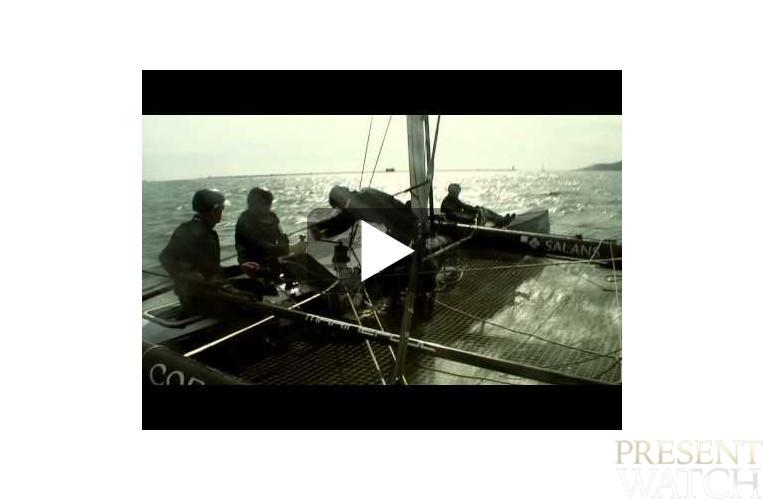 Loïck, how will Energy Team be working in Venice?

Loïck Peyron: "It will be more or less the reverse of what we saw in Naples: I’ll be at the helm and Yann will be with us at the start to offer his viewpoint. Exactly as we did in Naples, but with the roles reversed. This is what we had planned, as Yann has a schedule he needs to keep to with his MOD 70 and it’s a good idea to change things, as that means we always keep an open outlook. While we may not have the required funding for the moment, at least we have skilled sailors, who are able to adapt. For me, it is important to take the helm of the AC45 again, in order to continue to feel what it is like and keep up with the ideas. As for the organisation, our little shore team is already busy assembling the boat. I shall be arriving on Tuesday 8th and we will have a good week’s worth of training before racing begins."

There have been some changes to the programme in particular with the match race event...

LP: "Yes, the rules have changed and that’s a good thing. In Naples for example, it was all very sudden with elimination after just one duel. That gave rise to some strange results, with Spithill finishing seventh, for example. In Venice, from the quarter finals, it will be the best of three or in other words two wins if you prefer. To sum up, we shall be sailing much more. Another change is that the fleet race on Super Sunday now has a weighting of three instead of five. That means that the other races during the week will count more. This need for consistency is something that suits us."

What do you think about the line-up? Did you get a clearer picture from what you saw in Naples?

LP: "We really expected Prada to be a strong team... and they were even better than expected. Their skipper Chris Draper was previously at the helm of the Korean boat a few months back. And the Italian team managed to train with two boats. Even if they entered the circuit late, they have already sailed more than us. That is a good thing to open things up with stronger competition, even if it makes things tougher for us. Look at Nathan Outteridge, who came from the 49er and foiler moth circuits: he has done some great stuff, with all the enthusiasm you expect from a youngster... and that’s good too. It offers us even more proof that this Cup is going through a revolution in every sense of the term: there is a generational change, with the Cup no longer reserved just for those, who have come from match racing.”

What are the characteristics of the sailing area in Venice?

LP: “In Venice, anything can happen. I know a little about the waters here having raced aboard Oman Sail in an Extreme 40 event and because it was here that the Round Europe races started, when I raced on Fuji. These waters are extremely tricky, as there are so many different parameters and local effects. You really have to grab every opportunity. During the first two days, we’ll be racing outside off the Lido, but for the final three days and Sunday’s big race, we shall be inside just off St. Mark’s Square. This is going to be truly magnificent, even if we know that the race area is going to be complicated to deal with, as it is not very big at all. On an Extreme 40, the race area was already quite small, so on an AC45... But I enjoy this sort of challenge and in this legendary setting, it’s going to be a marvellous experience. Usually, the winds are quite light there and we may well have to fit the wing extensions."

So is Energy Team hoping for a place on the podium?

LP: "Yes of course. It’s always our goal to be up there on the podium. It has to be. Even if we are a bit behind in terms of training and the means at our disposal, that isn’t going to stop us from aiming high, as anything can happen in these races. We saw that clearly in Naples: the results are extremely close and the standard is getting higher and higher. The top teams and the others are now much closer, which is quite logical and only to be expected. The starts and the five minutes leading up to them are going to be crucial."

What is the crew line-up for Energy Team in this first event in Venice?

LP : “Skipper-helmsman: Loïck Peyron, Arnaud Psarofaghis on the wing, Devan Le Bihan mid-bow, Arnaud Jarlegan will be trimming the headsails and Christophe André out on the bow.”