A complete glossary to understand how a watch movement works 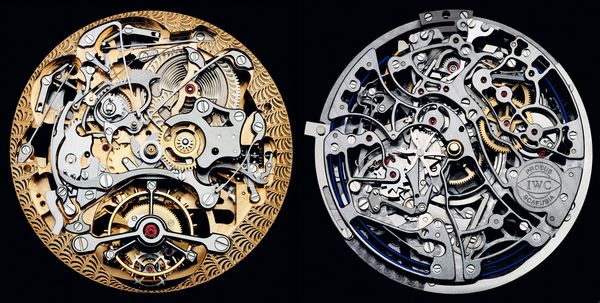 Glossary of watch terms
You will find on this page all the information you are looking for when it comes to watches mechanisms, movements and Mechanical watches

Known since the 16th century and one of the first additional functions in mechanical wheel watches. An acoustic signal has a pre-set wake-up function or appointment reminder.

A classic time display with a pair of rotating hands. Time is indicated by the related positions of the hour and minute hands.

The ends of a wheel or pinion axle.

Putting a watch together. This may be done completely by hand or on an assembly line.

A metal ring, which together with the hairspring balance forms the time-keeping element of a mechanical watch. With the help of its oscillations it divides the uniformly flowing time ñ together with the escapement ñ into exactly defined sections that are measured by the train of gears.

Drilled holes for the arbours of the train of wheels. In fine watch movements, the drilled holes are provided with jewel bearings, especially for the rapidly rotating wheels and pinion gears.

Originally the glass ring of a watch case that was snapped with the pressed-in crystal on to the centre part of the case. Decorative and rotating rings are often called ìbezelsî today.

Steel parts that have been tempered in the style of traditional craftsmanship until their colour changes. The parts are heated in a small pan over a flame. The metal surdial takes on the desired blue colour when the temperature reaches approximately 540∞F (300∞C). This process requires much sensitivity and experience.

Metal part that serves as a bearing for the rotating watch parts. In contrast to the cock that serves the same function, the bridge is screwed at both ends to the plate. Depending on the size of the bridge, it is stabilised with one or more screws.

Dimension and design of a watch movement and its parts. The calibre identification allows an exact identification of different manufacturersí movements, e.g. for service or for ordering replacement parts. Measuring unit for the gold content in an alloy. The unit of the standard is divided into 1/24. Fine gold, i.e. almost 100% pure gold, has 24K. A case of 18 carat gold has a content of 750/1000 of fine gold and other alloy metals (copper, brass, silver). The actual standard is embossed with a stamp.

Protective cover of a watch. Cases are available in many different types and materials. There is also a large number of case shapes (round, square, oval, rectangular, barrel-shaped or pillow-shaped).

A watch with a stop mechanism. A popular additional function for measuring time intervals, which allows a central sweep second-hand to start, stop, and return to its zero position independently of the actual watch movement. This does not affect the time display. Chronographs usually also have counters for minutes and possibly hours

Part of the watch movement. Functions as a bearing for a wheel or balance.

Additional mechanism in mechanical wrist watches that can only be made by specialists. The most important complications for mechanical watches include chronographs, calendars, retrograde indicators, striking works, or alarms.

Knurled button for winding mechanical watches and adjusting their hands. It is also often used to adjust the date display.

Indication of date, either in a hand analogue form or in digital form with a ring on which the dates are printed, and a window in the dial. The hand and ring complete a full rotation every 31 days. Both are moved forward one position at midnight.

Display of time and/or date with numerals. Rings or disks marked with the corresponding numerals rotate below the watch dial. The current display is shown in a window on the dial.

Unfinished, raw movement with a train of wheels and winding, but without escapement, balance or hairspring.

Pallet jewel balance made of synthetic ruby. When used in pocket watches, this pallet jewel formerly had the shape of an ellipsis to reduce friction in the pallet fork.

Mechanism comprising a pallet and an escape wheel and located between the train of wheels and the timekeeping element (balance and hairspring). It transfers the springís force in small impulses to the balance to maintain the latterís oscillations. It also prevents the un-braked running of the movement. The escapement allows the train to advance to the rhythm of the balance.

The finishing and decorating work on a watch.

A flyback is a chrono which works a bit differently from a normal Chrono (See CHRONOGRAPH).
The way a flyback works is as follow: If you push once the chrono button will start the seconds hand. If you push the chrono button twice then the seconds hand will reset to zero and begins. The purpose of the flyback is to begin re-timing as fast as possible.

Complete calendar with indication of the day of the week, date, and month. For months with less than 31 days, simple full calendars require manual correction.

Mechanical movement with a spring that usually requires manual winding daily via its crown.

To reduce friction in the most important bearings of precision watches, jewels are set into the pallets and ellipsis. While earlier watches used natural gem stones (e.g. rubies and sapphires), only synthetically produced jewels are used in modern watches. Complicated watches require more jewels. The number of jewels is indicated on the movement.

Traditional watchmaking measuring unit. It derives from the ìpied du roiî, the French foot. One line (ííí) corresponds to 2.2558mm. It is used to designate movement size.

A watch that is driven by a spring or weight and has a balance or pendulum as a time-keeping element.

A watch that strikes the hours, quarters and minutes on gongs. The repeater is activated by a slide in the case band.

Indicates the number of days since the last new moon. The indicators frequently used today comprise a disk with 59 teeth. The diskís surdial shows two full moons opposite each other, the disk turns twice on its axis during the course of 59 days. The current moon phase can always be read through a semicircular window on the dial.

The inner mechanism of a watch that keeps time and moves the watch's hands, calendar, etc. Movements are either mechanical or quartz.

A movement powered by a mainspring, working in conjunction with a balance wheel. Most watches today have electronically controlled quartz movements and are powered by a battery. However, mechanical watches are currently enjoying a resurgence in popularity.

A calendar that makes allowance for the differing lengths of months, from March 1 to February 29. In a normal February, with 28 days, the display must be manually advanced to March 1st.

One of the most complicated parts of mechanical watches: a small, two-armed lever with jewels that alternately engages with the escape wheel. The pallet transfers the force of the train to the balance to maintain the balance oscillations. It also prevents the un-braked running of the wound train.

Showing the date, the day and the month, a watch or clock calendar is described as perpetual when it can automatically adjust for short and long months as well as for leap-years.

In watchmakersí jargon, the name for the metallic plate carrying the bridges, cocks, and other components of a watch movement.

Total running time of a mechanical watch movement, i.e. the time between full winding and standstill due to the complete uncoiling of the main spring.

Indicates remaining running time on the dial of a mechanical watch movement.

Specialised companies produce watches that are outsourced by other companies who add their own name to the watches.

A hand that moves over a circular segment, e.g. for indicating the date, and instantly returns to its starting position once it reaches the end of the numerical scale.

Galvanic refinement, e.g. of the movement surdial, for protection against tarnish and for giving it a bright shine. Rhodanizing also provides a greater surdial hardness.

Mechanism for stopping the seconds hand. This allows the accurate setting of a watch to a second.

Additional mechanism using the wearerís arm movements to tighten the mainspring of a mechanical watch. A rotor converts kinetic energy into an energy potential.

System for protecting the fine arbours of the balance axle susceptible to breaking.

Seconds hand that rotates outside of the dial centre.

(Rattrapante)
A chronograph with two central seconds-hands. The extra hand runs concurrently with the main chronograph hand, but can be stopped independently, and then made to catch up with the running chronograph. The split seconds thus record the successive times of events that start together. The modern chronograph has its origins in the "observatory chronometer with twin seconds" devised by A.-Louis Breguet in 1820. It could record intermediary times or the durations of two concurrent events.

Popular alloy of steel, nickel, and chrome with molybdenum or tungsten added. It is rust-free, extremely resistant and non-magnetic, but relatively hard to work with.

Dial scale on chronographs. Used for the direct reading of average speeds in kilometres per hour.

A.-Louis Breguet was granted a patent for his best-known invention on June 26, 1801 (7 Messidor, Year IX of the French republican calendar). The tourbillon compensates for differences in rate caused by a watch adopting different positions. The principle is to mount the balance and escapement in a rotating cage. They revolve about their common axis, going through all positions to average out the errors. Tourbillon cages or platforms usually rotate once a minute, but four-minute or six-minute tourbillons are also found.

Transfers the energy from the barrel via gearwheels and pinions to the oscillation and escapement system.

In 1883, first Canada and then the United States introduced a world time system that divides the earth into 24 time zones. Based on the Greenwich zero meridian (Greenwich Mean Time ñ GMT), time shifts by a full hour every 15 degrees of longitude. Watches with a world time indicator show two or more time zones on a dial. For this purpose either several watch movements are positioned in a case, or an additional mechanism permits the time for several time zones to be displayed.