As of June 2nd 209, the Piaget Time Gallery located at 40, rue du Rhône in Geneva, is hosting a new exhibition called PIAGET POLO, A LEGEND.

Piaget is thereby strengthening its ties with the public by offering visitors a chance to discover 30 years of creativity around a legendary watch. This gallery located above its Geneva boutique, historical and contemporary watches along with historical documents retrace 30 years of this emblematic collection.
The exhibition also provides an opportunity to explore the brand’s longstanding passion for polo.

Piaget invites you to experience the saga of this legendary collection, by appointment only,
Monday through Friday from 10 am to 5 pm and Saturday from 11 am to 4 pm.

For its 30th anniversary, it has treated itself to a makeover in a titanium version. Created by Yves G. Piaget in 1979, the Piaget Polo soon became a star thanks to its design, its elegance and its spokesperson at the time, Ursula Andress. Since then, it has found its way unscathed through changing fashions.
Much more than just a watch or a fashion accessory, it is an authentic symbol of luxury.
Crafted in white or yellow gold, it is worn at any time of the day or night – and that is indeed one of the many reasons behind its amazing success.

“The entire Polo philosophy can be summed up in one sentence: it’s a watch bracelet rather than a mere wristwatch.” Yves G. Piaget 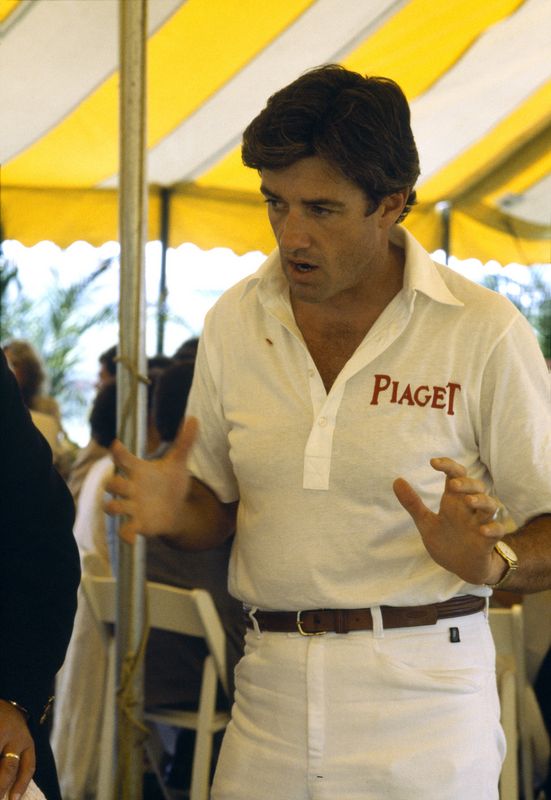 “The Piaget Polo is kind of like my child”, explains Yves G. Piaget, “and I’m always a little moved when talking about it.” Both moved and proud, since not many people have been fortunate enough to father a star that has been shining in the fine watchmaking universe for the past 30 years. Numerous press clippings and pictures from that period testify to its amazing popularity, including snapshots of Pop Art king Andy Warhol, stunning actress Brooke Shields, jazzman Sammy Davis Junior, along with two stars from the famous American Dynasty soap opera, John Forsythe and Pamela Sue Martin… All of them have at one time worn the legendary gold bracelet.
“It represented the first time one of our watches was created to meet demand and not ‘imposed’ on the market as the custom used to be”, recalls Yves G. Piaget. “In 1979, it matched a strong desire expressed by the American market: our retailers wanted a luxury sports watch. In technological terms, we had just introduced the Piaget 7P quartz-powered analog-display movement driving classic hands on a conventional dial display. At just 3.1 mm thick, it was the thinnest in the world, and also a rare commodity due to being produced in extremely limited numbers. Around that same period, our designers had the idea of creating dials that were totally integrated within a solid gold bracelet alternating satin-brushed gold for the flat links and polished links on the gadroons. Since then, the DNA of this watch has remained unchanged, even though it has adjusted to each new era. A Piaget Polo is always instantly recognisable.”

“Each time people saw the name Piaget, they thought of the Polo, and each mention of the word Polo evoked Piaget…”
Yves G. Piaget

Similar to Piaget Polo, a legend