RJ-Romain Jerome pay tribute to the Day of the Dead

LIMITED AND NUMBERED EDITION OF 25 PIECES

Every year in Mexico, celebrations honouring the dead brighten up the whole country.

Classified as part of UNESCO’s "Intangible Cultural Heritage of Humanity" since 2003, the "Día de los Muertos" is the most important date in the Mexican calendar.

RJ-Romain Jerome has decided to pay tribute to this traditional custom with a watch in which every detail echoes the joyful, colourful festivities that accompany the Day of the Dead.

One has to go back 3,500 years to find the origins of the "Día de los Muertos", when pagan rites of Aztec origin blended with customs inherited from the Spanish colonialists.

This tradition did not completely disappear with the arrival of the Spanish colonialists who simply changed the date of the festival so that it coincided with the Christian celebrations on All Saints Day at the beginning of November.

Still today, the "Día de los Muertos" is an occasion for the Mexicans to laugh at death with a certain degree of irony combined with a great deal of humour, derision and sarcasm.

Music, sweeties, tequila, brightly coloured decorations and many caricatures of the dead enliven the streets across the country.

RJ-Romain Jerome has decided to take its turn celebrating the Day of the Dead with a timepiece available in two different versions, both issued in 25-piece limited editions. 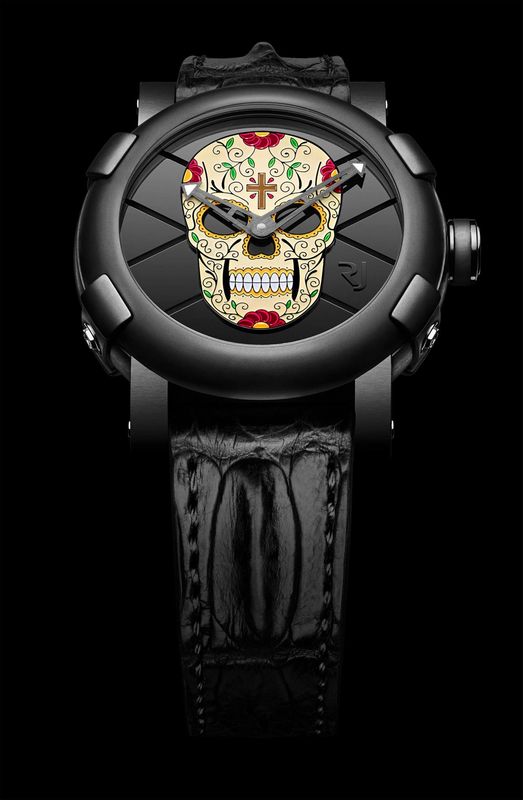 Calling upon its watchmaking skill, RJ inspiration for the dial of this watch dedicated to the "Día de los Muertos" was drawn from traditional Mexican decorations.

A carefully hand-crafted colourful applique adorned with a champlevé decoration, cold enamelled in different colours, emulates the look of the "calaveras" – the skulls made of sugar given away by the Mexicans as good luck tokens during the entire festival.

The seven colours on the applique are a reminder of the seven stages through which the soul of the dead must pass before being able to rest in peace.

The case is made of black PVD-coated steel, associated with a bezel and "paws" in black ceramic.

The mirror-polished dial features an engraving of the brand’s emblematic X shape, along with the applied RJ logo.

The watch is fitted with a black Hornback alligator strap.

The sombre colours of these different elements evoke those of darkness and make a striking with the bright colours of the skull-shaped applique.

This way of perceiving death, tinged with light-hearted irony, is unique to the Mexican culture to which RJ-Romain Jerome is paying tribute.

With this timepiece in homage to the "Día de los Muertos", the watchmaking Maison can also claim to have tamed death and thus made it a playmate.