Art of the Dance in the Collection Métiers d’Art 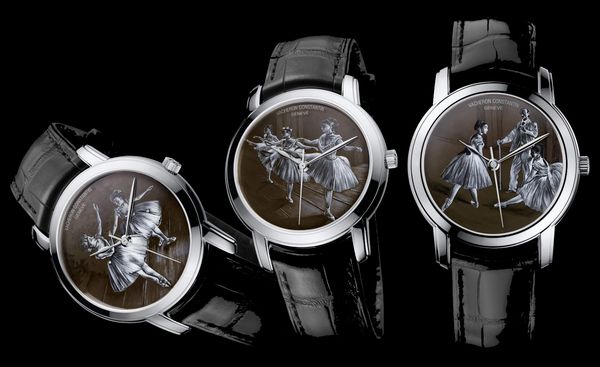 -> A new Métiers d’Art collection dedicated to the ancestral art of Grand Feu grisaille enamelling
-> Three unique creations bearing the Poinçon de Genève (Hallmark of Geneva)
-> A vibrant homage to the world of dance and the work of Edgar Degas, inspired by his fascination for ballerinas

On the occasion of the tricentenary of the École Française de Danse, Vacheron Constantin unveils the three first one-of-a-kind creations in its new Métiers d’Art Hommage à l’Art de la Danse collection. These creations from the workshops of the Manufacture revisit the ancestral art of Grand Feu grisaille enamelling to highlight the art of classical ballet through several masterpieces by Edgar Degas.

In becoming a patron of the Opéra National de Paris in 2007, Vacheron Constantin chose to provide a uniquely inspirational stage for the artisanal traditions of the Fine Watchmaking artistic crafts known in French as Métiers d’Art. This partnership uniting time, art and culture celebrates the values on which the brand has been built since its founding in 1755: supporting creativity, openness to the world, sharing a passion, passing on knowledge and the quest for excellence.

In horology as in ballet, accomplishment is above all an intensely human story filled with encounters and with shared and perpetuated skills. Time has no hold on these crafts governed by high demands and constant challenges crystallised by perpetual enhancement, boldness and passion.

Following in the footsteps of the series inspired by the fresco painting by Marc Chagall adorning the ceiling of the Palais Garnier, Vacheron Constantin now provides a further demonstration of its expertise and its mastery of the most ancient decorative arts. The three first unique creations in the new Métiers d’Art Hommage à l’Art de la Danse collection will be presented at the gala evening for the tricentenary of the École Française de Danse, held on April 15th 2013 in the Palais Garnier. They reinterpret certain works by Edgar Degas – and his superlative ability to capture the graceful gestures and poses – through the age-old art of Grand Feu grisaille enamelling.

Price: On DEMAND ONLY