The brand Louis Moinet has kept us in suspense for almost a month, but now the secret is out : Louis Moinet is the Real Inventor of the Chronograph 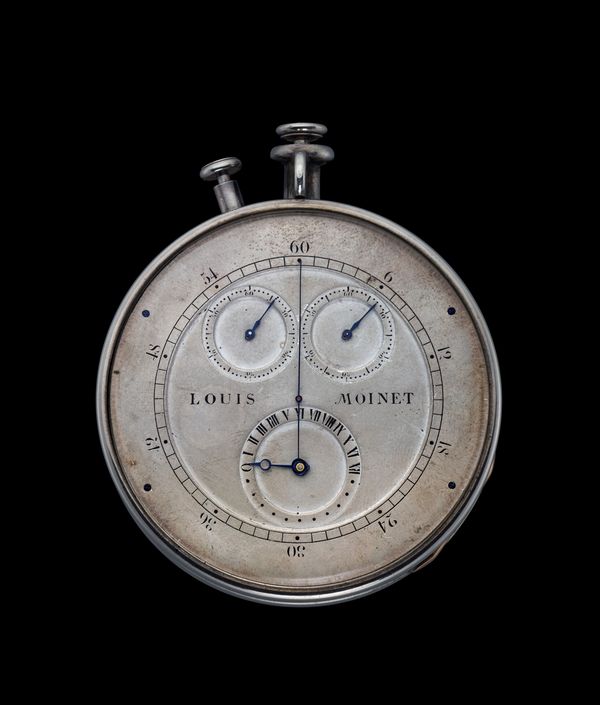 The recent discovery of a hitherto unknown timepiece is rewriting the history of watch development. It turned out to be the first ever chronograph, although its maker, Louis Moinet, called it a "compteur de tierces". According to hallmarks on the dust cover, the chronograph was started in 1815 and completed the following year.

This remarkable instrument of an entirely original design is evidently the work of a genius well ahead of his time. It measures events to the sixtieth of a second (known in those days as a "third" or tierce in French), indicated by a central hand. The elapsed seconds and minutes are recorded on separate subdials, and the hours on a 24-hour dial.

The stop, start and reset functions for the central hand are controlled by two buttons which qualifies it as a chronograph in the modern sense, although the term was coined much later. The return-to-zero function was revolutionary for the time. Until today, this invention had been thought to date from Adolphe Nicole’s patent of 1862. 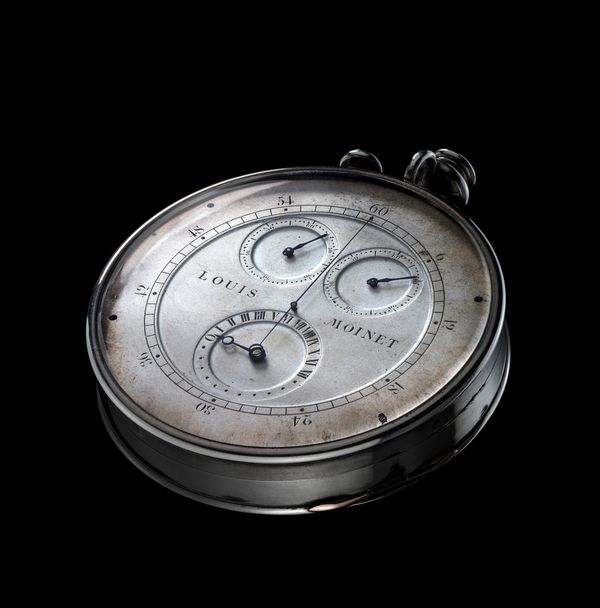 In the 19th century, watchmakers sought to increase the precision with which they could measure time by increasing the frequency of their watches. By 1820 the generally accepted limit was time measurement to the tenth of a second.

Moinet’s compteur de tierces "thirds timer" was thus by far the most precise instrument of its period, measuring time six times more closely than the norm. Moinet’s division of time into sixtieths of a second is another historical achievement that places him among the great contributors to modern watchmaking.

The chronograph’s balance beats at 216,000 vibrations an hour or at the then unimaginable frequency of 30Hz. To put that into perspective, the usual balance frequency in a modern wristwatch is 28,800 v/h or 4Hz. Louis Moinet is thus the father of high-frequency time measurement, although it was not until exactly a century later that a watch was made to beat his record. 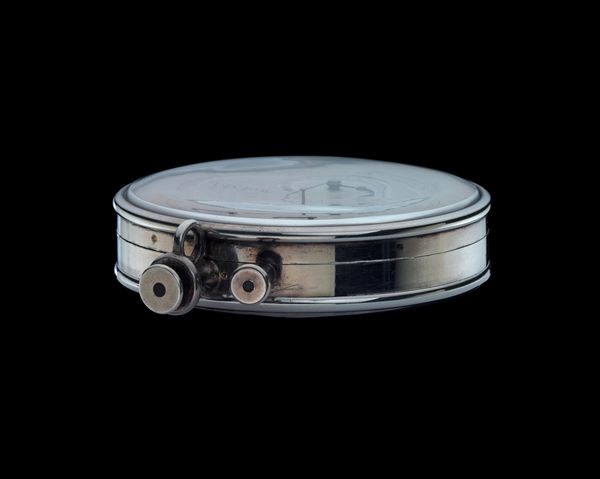 SETTING THE SIGHTS ON THE STARS

Moinet made the timer for an astronomical transit instrument, originally mounted for use at sea, that he had adapted to track the movement of heavenly bodies from the land. According to a letter he wrote in 1823, "I came to Paris in 1815 with the sole purpose of devising and making a compteur de tierces. The difficult and seldom attempted realisation of this instrument of a new construction, has achieved my purpose most satisfactorily".

Why did Moinet need such high frequency? He was timing the passage of stars, planets and even planetary moons. A frequency of 216,000 v/h imparted 60 vibrations a second, thus dividing the second into sixtieths. He made the compteur initially to set the precise distance between the crosshairs in his telescope, as he describes in his 1848 Traité d’Horlogerie:

"This invention came to me during my observations in the following circumstances. I had acquired a small mobile quadrant by the famous Borda (maker of the entire circle). This instrument, of excellent English manufacture, was balanced on rubies, and by an ingenious system of counterweights was supposed by its maker to be preserved by its own inertia from the motion of the ship, and to provide at sea observations almost as exact as those obtained on land. But the project was not successful.

Having acquired the instrument for another purpose, I added, for terrestrial observations, an azimuth circle graduated in minutes with a vernier by the late Fortin, two intersecting levels, a polished mobile axis and a three-footed stand with levelling screws and a scale etc. However the scope’s narrow field of vision put the reticule lines very close together, and it was to remedy this inconvenience of failing to see a line, that I thought up the compteur de tierces, which worked very well by giving me a precise distance between the reticule lines". (*) 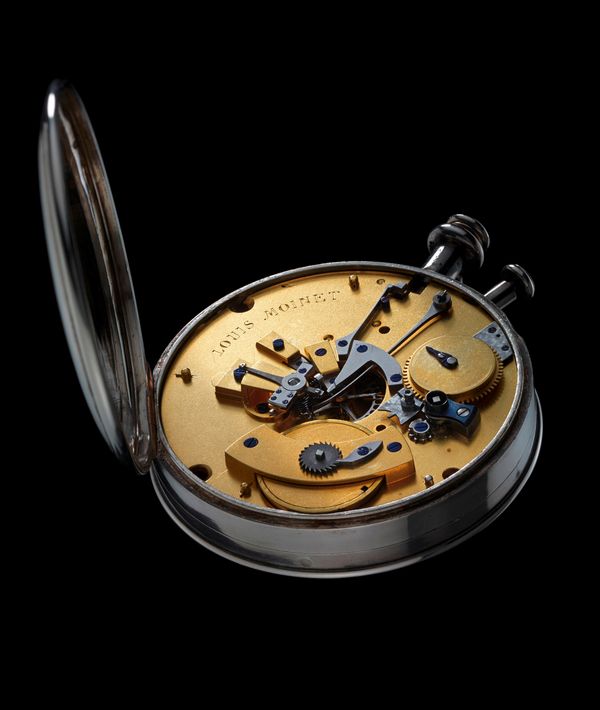 Moinet’s compteur had to function for at least 24 hours at an energy-hungry frequency to time successive transits of a star. To minimise energy consumption his escapement ran on oiled rubies. He reported that it had worked very well for a prolonged period.

The greatest men are often the most modest and such was Louis Moinet, an academic, who shared his research with fellow horologists, rather than a businessman in pursuit of profit. His peers regarded him as one of the greatest horologists of all time.

Monsieur Delmas, vice president of the Paris chronometry society had this to say about him: "He was everywhere, at all the discussions just as when he was president of the chronometry society: precise, clear, indulgent, enlightening and encouraging the weak, giving advice to all without self regard, spreading light without ulterior motive". (From the Panthéon Biographique Universel, 1853).

Today it’s an honour to pay tribute to a great man whose motto was "The essential thing is never to depart from what is true". 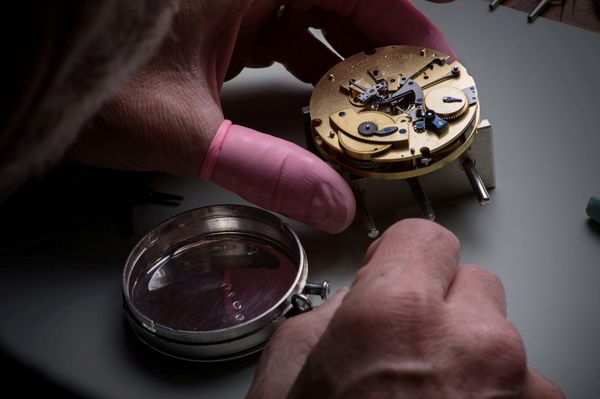 HANDS
Slender, counterpoised centre hand for the 60ths of a second
Two identical hands for the seconds and minutes counters
An open-tip hand for the hours
All the hands are in blued steel

CREATED IN 1816
Louis Moinet is the chronograph’s inventor

SIXTIETH OF A SECOND
Indicated by the central hand, the chronograph measures the sixtieth of a second

216,000 VIBRATIONS PER HOUR
Louis Moinet was the father of high-frequency time measurement 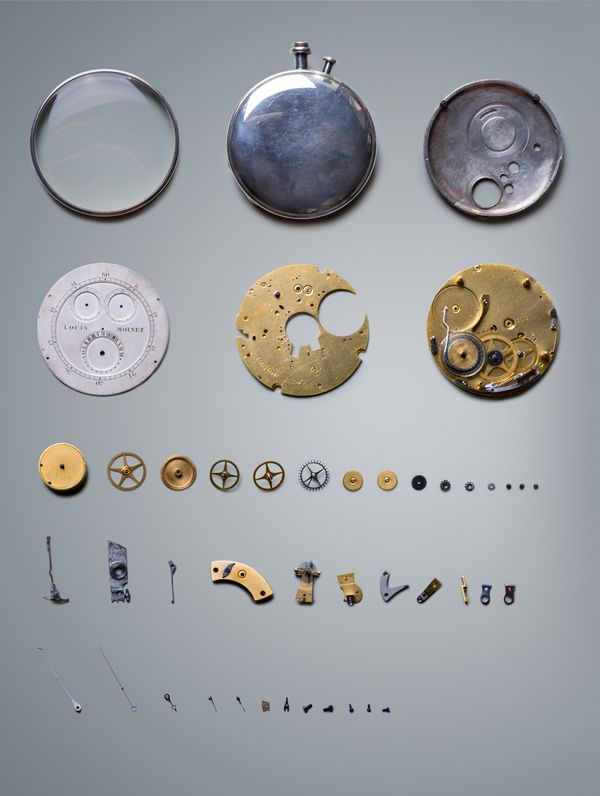