The "Sphere" showcase – Watchmaking at the speed of light by Dietlin

Dietlin has developed an innovative and original new showcase exclusively for Hublot watches, which it has called "the Sphere".

A preview of this was given at Baselworld last March on the Hublot stand and it created a veritable visual event, attracting many on-lookers and visitors throughout the week all of whom were surprised and im-pressed by its effects and who tried to figure out just how it worked.

Its principle? A ring is placed in a glass bell, rotating on itself at 30 rps. On this ring, 240 lu-minous LEDs are placed outside and inside which make it possible to project a double-faced image, inside and outside the Sphere (the LEDs are subjected to 240G, so that each LED weighs 240x its initial weight. At the speed at which the ring turns, it distorts and, at full speed, loses up to 1 cm at the top).

With what is called retinal persistence, as the ring is turning so fast, the human eye is not able "to refresh" the images it receives fast enough to see that it is a rotating ring.

It retains in memory the preceding image which has not yet been updated. This being so, it at best distinguishes a silhouette in the form of a sphere, and perceives a movement.

By filming the sphere, a film (or photographic) camera can update fast enough to clearly show the ring ro-tating. This the human eye cannot do. This effect can easily be checked by filming a com-puter screen or neon tubes (lines are visible whereas the eye does not see anything). And it is precisely this that makes it difficult to photograph or film the Sphere. 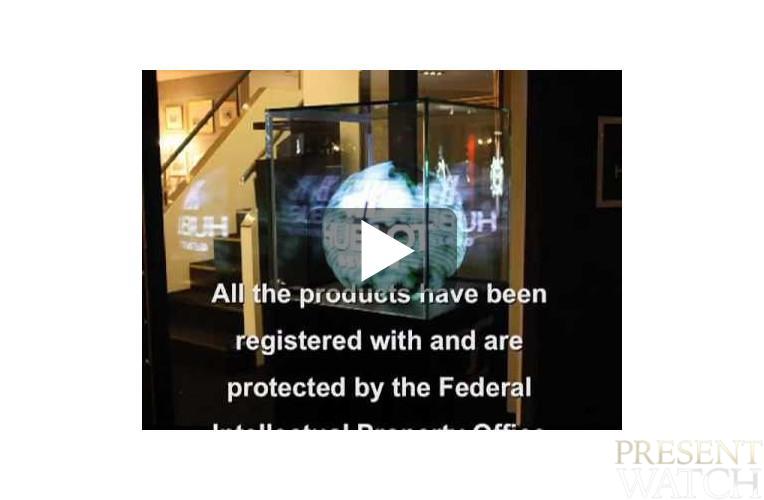 As it turns, each LED receives 11,200 signals per second. The result is an endless spherical image, in colour of course, since it returns on itself and is visible through 360° both inside and outside the sphere.

The number of data units fed to each LED is so great that the com-puter reading system had to be integrated into the board (it turns, too).

Any image can be projected: for example, the watch located within the ring can be lit by cre-ating "virtual spots" which can move in space.

Visitors to Baselworld were surprised to find the "Sphere" showcase at the entrance to the HUBLOT stand. It was the visual attraction of the show.

Just after Baselworld, the Sphere was presented in the Matsuzakaya Nagoya Store in Nagoya, Japan, then in the Hankyu Umeda Flagship Store in Osaka where the Japanese, who are insatiable consumers of tech-nological innovation, had a chance to see it.

The main Hublot boutiques around the world will receive their "Sphere" with new surprising images, starting this autumn. A new film is being prepared, which will undoubtedly intrigue visitors.