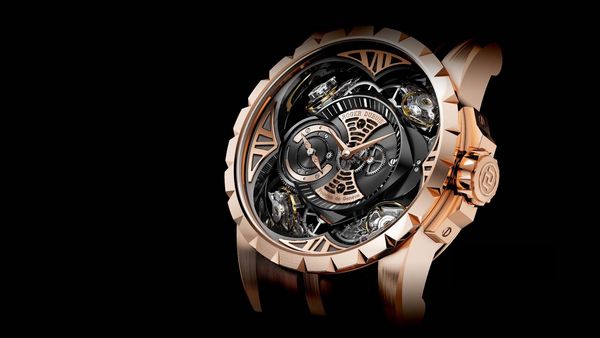 A WATCH WITH FOUR HEARTS

An exceptional achievement in the history of Haute Horlogerie signed Roger Dubuis.

- The first watch equipped with four sets of spiral-balance world.

- The first watch with silicon case.

The mechanical magic of one of the most innovative Manufactures of the 21st century. 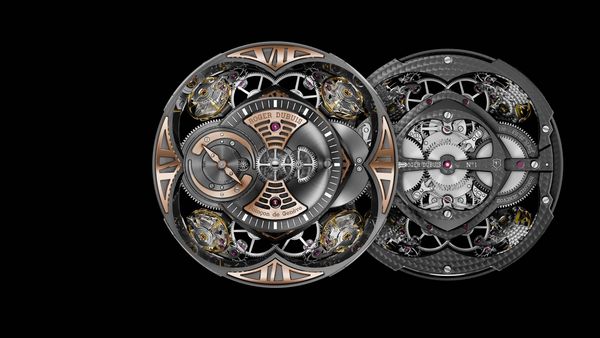 THE ULTIMATE CHALLENGE TO GRAVITY

This piece, played by four sets of spiral-balance and accompanied by five differentials.

Roger Dubuis is one of the very few Manufactures with totally integrated production.

Its invaluable expertise enables it to incorporate not just one but four sprung balances in the same movement, the calibre RD101, a feat that was considered impossible until now. 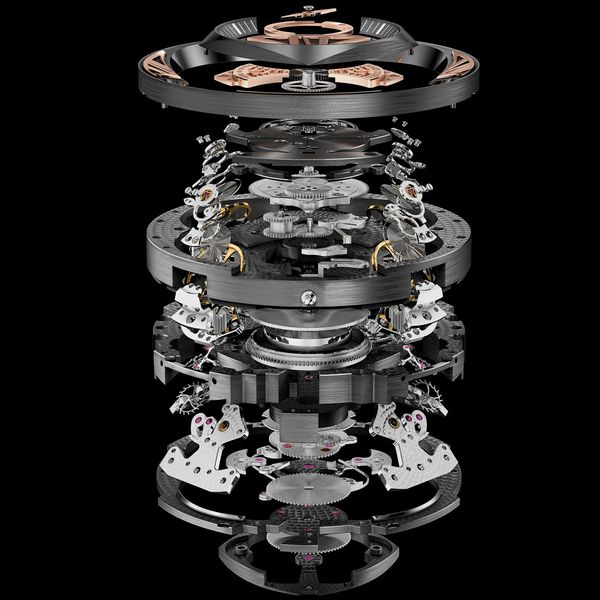 THE END OF TOURBILLON ?

The four carefully positioned sprung balances work in pairs to compensate immediately for the rate variations caused by the changes in position.

What the tourbillon achieves during the course of a minute, the Excalibur Quatuor achieves instantly. 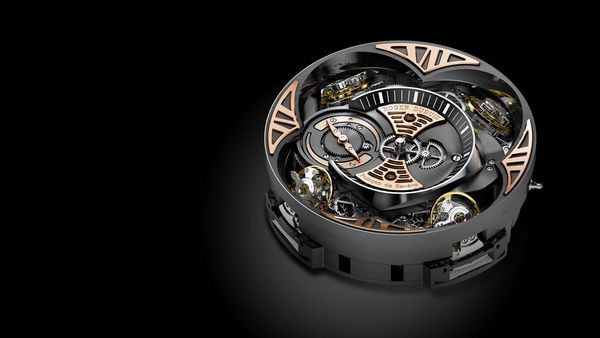 A classic watch operating at a frequency of 4 Hz is considered to be highly precise. But the Excalibur Quatuor raises the bar much higher with its frequency of 16 Hz. This is an exceptional performance: the 16 Hz refers to the basic movement and not just one of its functions.

As each balance oscillates four times per second, the frequency of the watch is multiplied by four as the balances do not oscillate simultaneously. The ticking of a classic watch is now replaced by the gentler sound of truly high precision. 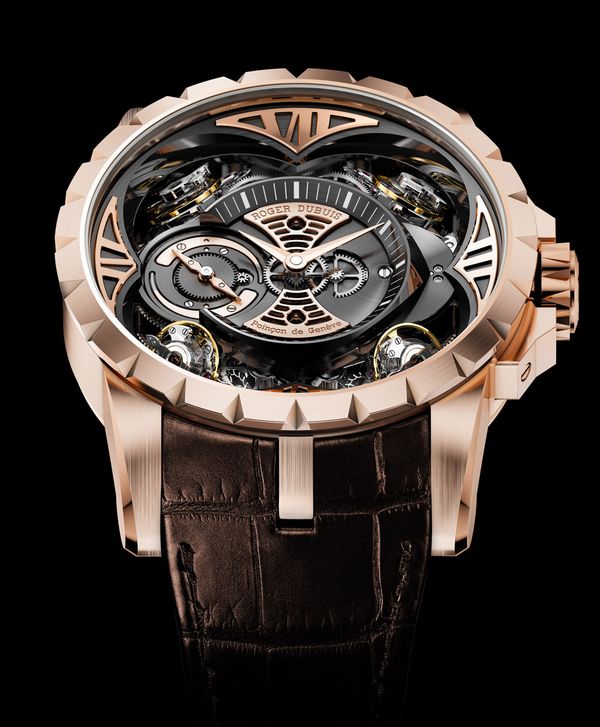 Defying the laws of gravity and high frequency is not enough for the Excalibur Quatuor. It also offers a completely new way of indicating the power reserve.

While a double display showing the crescent of the moon turns at the same speed as the barrels (4.5 revolutions per day) the needle also turns, but more slowly. As the power reserve reduces, the hand follows the barrels’ rate of discharge, positioning itself precisely on the two moon crescents to indicate the power still in reserve. A patent has been filed for this inventive, precise, intuitive and innovative mechanism that perfectly represents the values of Roger Dubuis. 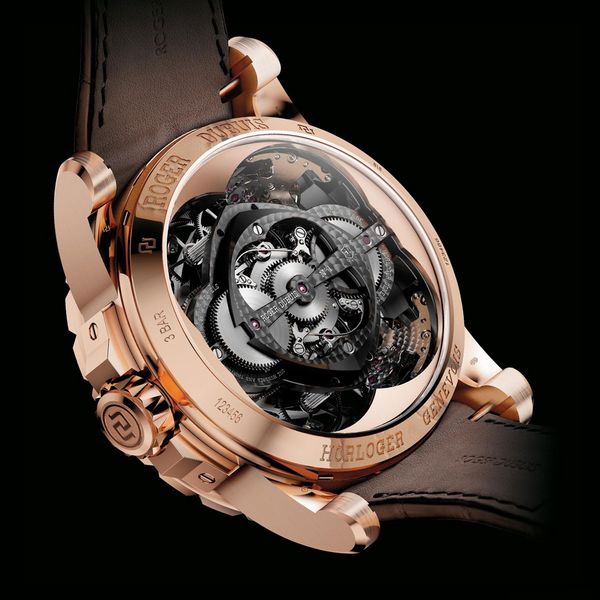 Roger Dubuis had already made headlines in 2005 by introducing a double flying tourbillon with a differential. This extraordinary technical achievement laid the foundations of the seven-year research programme required to produce the Excalibur Quatuor watch. This is a watchmaking masterpiece that not only integrates four sprung balances and an original power-reserve display, but includes no fewer than five differentials. Three of them link the balances in the gear train, one on the centre-wheel and the two others on the third wheel, providing an average of the positions for uncompromising accuracy. The fourth differential controls the power-reserve display, while the fifth connects the rewinding stem to the two parallel barrels. 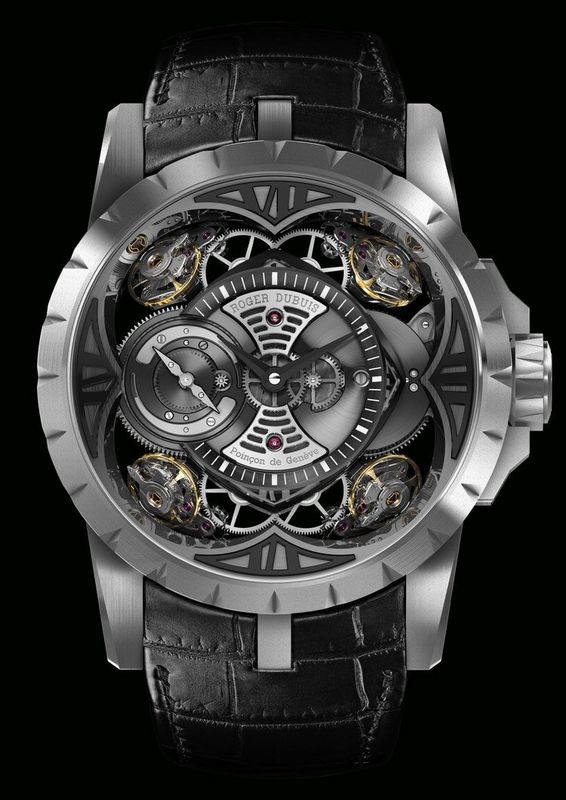 THE FIRST-EVER WATCH WITH A CASE ENTIRELY PRODUCED IN SILICON

Silicon has a similar atomic structure to diamond and working with it requires just as much skilled expertise. Roger Dubuis has called on numerous specialists using highly advanced techniques to produce this case in "metallic crystal".

Roger Dubuis is constantly seeking to stretch technical limits and meet unbelievable challenges. Now it, surprises the world of watchmaking once again by presenting the first-ever watch with a silicon case.

Thanks to the expertise of the Manufacture, this “Metallic crystal” adds a unique aesthetic dimension to this masterpiece which is available in three highly exclusive pieces. A total of 88 pieces of the Excalibur Quatuor in pink gold will also be produced. 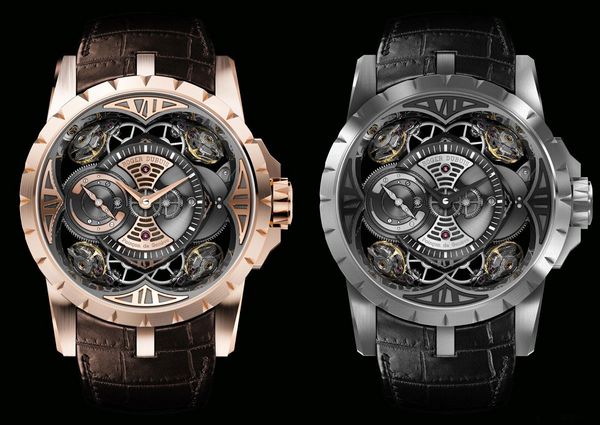 You can found the video here - Roger Dubuis - Excalibur Quatuor