THE MOST TITLED BRAND IN THE FIELD OF PRECISION

Only with 22 years, very young, in 1865 Georges Favre-Jacot founded the "Fabrique des Billodes" in Le Locle.

First he manufactured precision pocket watches, which were signed with his name.

About 1900 the product range was expanded: There were on-board chronometers, table clocks, precision pendulum clocks and later marine chronometers.

The name "ZENITH" came to his mind when he just had developed a movement which seemed to him more perfect than all previous.

looking up at the sky full of stars the sky appeared to him similar to the game of the wheels and cones in a perfect mechanical instrument and he decided that his new movement and its manufactory should be named after the highest point of the universe:

From this emerged a five-pointed star as corporate icon.

From 1903 the Favre-Jacot company took part regularly and very successfully in the competitions of the observatory Neuchâtel with its pocket watches and on-board chronometers.

In 1903 he achieved a first prize in the competition of the observatory of Neuchâtel.

The nephew of Favre-Jacot: James Favre sold the watches to North and South America, Russia, India, China and Japan.

By transforming the firm into a stock company in the year 1911 the ZENITH brand arose.

In the same year Favre-Jacot retired and handed the management of the company over to James Favre.

By James Favre, there was a revival of old traditions, especially with the "Neuchâteloises".

These new pendulum clocks were equipped with a 8-day carillon and on demand had also a quarter-hour repetition.

In 1923 he founded another company in the French Besançon and in 1926 an additional office in New York.

After the First World War ZENITH began with the development and manufacture of wristwatches, including alarm and chronograph functions.

For the chronographs movements by Valjoux, Excelsior Park and from 1960 on by Martel were used, which were bought by ZENITH.

In May of the year 1929, the astronomical observatory in England told the public that out of 19,835 watches from all over the world a watch by ZENITH set a new record with a daily deviation of only 0.6 seconds. 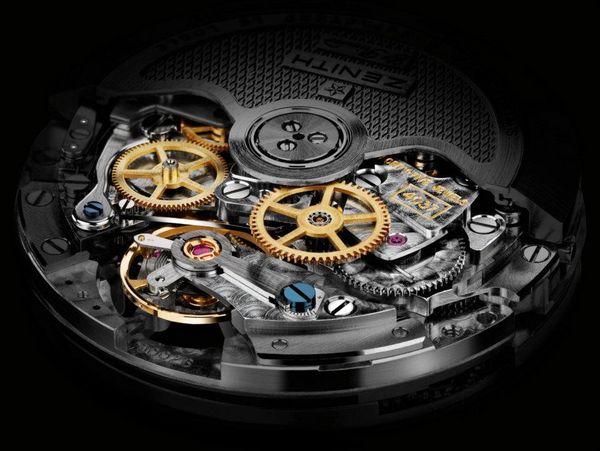 In 1948 the precision caliber 135, successful at many chronometer competitions, entered the market.

In 1969 followed the first automatic chronograph "EL PRIMERO" developed along with Movado.

Mondia and Movado are included in the company and from this merger arises the holding company "Mondia-Zenith-Movado".

The development of the automatic chronograph movement "EL PRIMERO" or in English "THE FIRST" had already started in 1967.

Not only was it the first automatic chronograph movement in the world, but the movement oscillated with even 36,000 A/h.

The "EL PRIMERO" presented on 10 January 1969, outcompeted the concurrent development of a competing consortium with Breitling, Heuer-Leonidas, Hamilton - Buren Watch Company and Dubois Dépraz, which presented their product only on 3 March 1969 under the name of Caliber 11 "Chronomatic".

In contrast to the "Chronomatic" the "EL PRIMERO" is produced even today with great success and is highly esteemed by connoisseurs as one of the top-quality chronograph movements.

In 1971 the majority of shares of the company is taken over by the American Zenith Radio Corporation of Chicago, America's largest group for the manufacture of electronic components.

One of the reasons, perhaps, were to exclude problems the Americans feared because of the name similarity.

ZENITH was planned to be used as a base for sales of quartz movements produced in the U.S. Believing in their imagination of the future the Americans soon lost interest in the mechanical movements and in 1978 ordered the production to be stopped and all movements, fournitures and machinery to be destroyed.

It is thanks to the head of the chronograph studios, Charles Vermot that the "EL PRIMERO" was saved for the afterworld.

He objected to the order and hid large quantities of plants, tools, machines, and all design and manufacturing drawings in the attic of the manufactory.

In the end of 1978, the ZENITH brand was sold to the Swiss Dixi group.

With the support of the watch manufacturer Ebel the production of the "EL PRIMERO" was resumed.

First the movements of Ebel were used, but since 1984 there were again watches from ZENITH.

In 1990 to the 125th Anniversary of the company's founding ZENITH presented a collection which consisted of four models:

Three mechanical watches with manual winding and one chronograph.

All models had a COSC chronometer certificate.

The edition of the mechanical models amounted to 300 copies, while the chronograph was published in a limited edition of 500 copies.

The numbering together with the ZENITH Crest could both be seen on the dial as well as on the case back.

The chronograph was equipped with a 13-lignes "EL PRIMERO" movement 400, while the mechanical models possessed round 11-lignes ZENITH calibers with 17 jewels and had also a small second.

All models featured enamel dials and were produced with various indications.

At the Baselworld 1991 ZENITH showed two particularly valuable collections to the 700th Anniversary of the Confederation Helvetia.

Both series were produced in limited and numbered editions and offered chronograph chronometer models.
The calibers 400 and 410 were used.

The Caliber 410 consisted of 354 components, of which 277 were not interchangeable with each other.

On the face of these models a full calendar could be seen, and at the outer edge of the moon phase indicator at the 6 appeared the 12-hour schedule of the chronograph.

The dial of the Caliber 400 shows only the date.

REORIENTATION IN THE LVMH

After ZENITH, together with TAG Heuer, had become part of the luxury goods group LVMH, the brand was positioned as a luxury watch brand of the top class.

ZENITH plays a special role within the group as supplier of manufactory movements.

THE MAN BEHIND THE RE-BIRTH OF ZENITH

Finally, in 1999 ZENITH was acquired by LVMH Moët Hennessy Louis Vuitton Group and in 2001 Thierry Nataf was appointed CEO of ZENITH.

From January 2002, Thierry Nataf, who was also responsible for the design of new models as an art director, was president of the Swiss watch manufacturer.

Thierry Nataf takes the credit of having modernized both the collection and the company itself.

He successfully managed to free the ZENITH brand of its somewhat tame and antiquated image.

His mission was also a commercial success.

The turn of the century saw ZENITH reinvent it self and modernize its timepieces.

In 2002 at the Basel watch fair, ZENITH launched 4 new movements and 14 new models that represented an overwhelming 52 new variations.

There have been several innovations made by ZENITH in the 2000's and many new models have been launched.

In 2011 Thierry Nataf departure from ZENITH and nervously the watch world awaited the announcement on who would be the new CEO.

In beginning of 2011 enter Jean-Frédéric Dufour.

A man with a solid background in the watchmaking industry.

After graduating in commercial and industrial sciences at the University of Geneva, Jean-Frédéric Dufour made a veritable tour d'horizon through the haute horlogerie.

To this day ZENITH remains one of the rare manufacturers capable of producing all parts of its watches.

It is also the first to have developed in 1969 a high-frequency automatic integrated column-wheel chronograph powered by the legendary EL PRIMERO 3019 movement beating at 36,000 vibrations per hour.

This obsession with precision as well as this constant quest for technical innovation have been duly rewarded.

In the almost century and a half since its founding, the Manufacture has been awarded 2,333 chronometry prizes as well as eight medals.

Making it the most titled brand in the field of precision.

They developed to date 600 movement variations and 300 patents filed, all bearing eloquent testimony to this peerless technical expertise.

Similar to History of Zenith 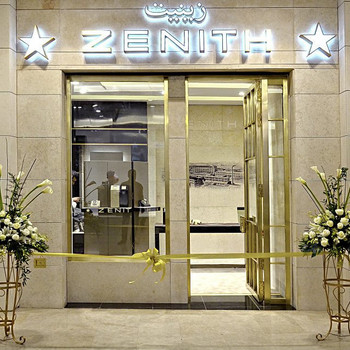 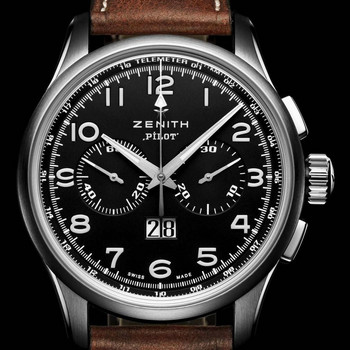 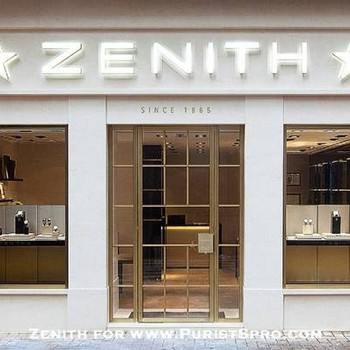 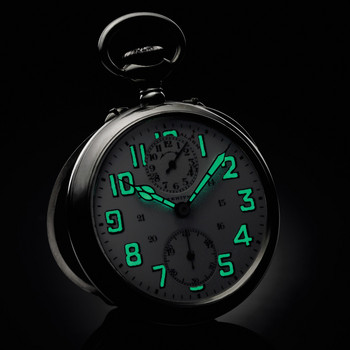 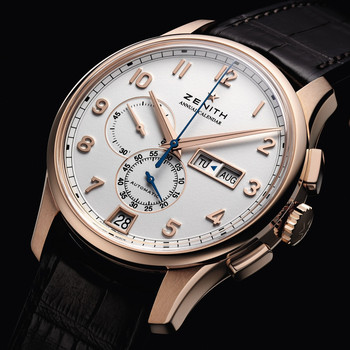