REPETITION SOUVERAINE
An ultra flat and extremely light Minute Repeater François-Paul Journe is continually searching to invent and craft timepieces which are both innovative and practical. He has managed both with his first ultra-flat Minute Repeater. After the Grande Sonnerie, the minute repeater is the most complex and sophisticated of horological complication, one that demands the very utmost in both technical and artistic virtuosity.

To date, the oldest known watch with répétition minutes was produced around 1710 in Friedberg, Germany. This invention made it possible to tell the time during the night by actuating a pusher on the case. When activated by the pusher, the complication "tells" the time by causing two hammers to strike gongs which sound the hours, the quarters and the minutes.

With this new ultra-slim minute repeater, François-Paul Journe once again raises the bar for striking watches. The key goal for the creation of the Repetition Souveraine was to create a minute repeater that would leave an imprint in the history of horological science.

He has re-invented the minute repeater mechanism in a way which enables strong crystal clear tones to emanate from a seemingly impossibly svelte movement of barely 4mm, more reminiscent of a simple hand wind calibre than a highly intricate and complex complication. 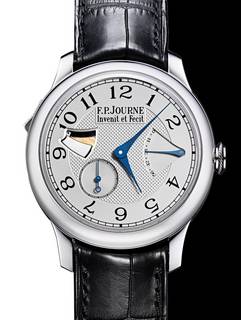 By looking at it, one would never guess the complicated mechanism hidden behind it. The simple aspect of its silver guilloche dial, identical to that of the Chronomètre Souverain, hardly let foresee the discrete window placed between 9 and 10 o’clock. It features the hammers striking the gongs at the hour, the quarters and the minutes, which can be activated by pressing a delicate indented slide on the left side of the case.
This redevelopment has merited the application of two patents. Its ultra flat movement in 18K gold with its case in steel provide an astonishing lightness to the watch for a weight of only 69.6 grams, strap included. It makes the Repetition Souveraine one of the weightless complications in the world.

Unique patented Repetition Souveraine mechanism Two key technical developments have enabled François-Paul Journe to construct a sweet sounding ultra-slim repeater movement. The first is the flat gong, first seen on the F.P. Journe Grande Sonnerie, which produces a louder and clearer sound than traditional gongs. And because the gong is mounted under the dial, instead of around the movement, it allows more room for the movement. The second is an innovative system of striking racks and strike selection mechanisms which take up much less space than conventional strike mechanisms.

Unlike traditional minute repeaters, the hours and minutes of the Repetition Souveraine do share the same hammer; so a pause is automatically inserted between hour and minute chimes when there are no quarters. The quarters sound with classic double chimes. An inertia regulator controls the speed of the chimes, thus eliminating the background noise usually associated with traditional air regulators.

The incomparable style of François-Paul Journe has sometime been copied, but his highly inventive technique is far more difficult to duplicate. With that in mind, after completing his majestic Grande Sonnerie, a watch rating 10/10 on the scale of complications, François- Paul Journe decided to follow up with yet another incredibly complex timepiece, the first ultra-slim Minute Repeater wristwatch. Case There is one metal that resonates sound above all others and that metal is steel. In his typical no-compromise style, François-Paul Journe places performance and function above all.

So it is only natural that, as with the Sonnerie Souveraine, the dulcet tones of the Repetition Souveraine reverberate from a stainless steel case. Movement The manually wound movement, with base-plates and bridges in 18 carat rose gold, oscillates at 21,600v/h. Twin barrels work in parallel to deliver stable power for most of their 56-hour indicated reserve.

The F.P. Journe free-sprung balance, with variable inertia adjustment on four opposing weights, is dynamically adjusted in six positions. Many more components in very little extra space. While the Repetition Souveraine calibre shares its technical heritage with the Chronomètre Souverain, the sheer complexity of the minute repeater demands nearly twice the number of components. Despite this, François-Paul Journe has managed to craft a movement with a height of just 4mm.