Long before Baselworld opens its doors, in January Rolls-Royce Motorcars and Revolution Magazine invited select guests in Singapore to preview three masterpieces: GRIEB & BENZINGER presented the three heaviest platinum watches in the world. These complicated timepieces together equal a monetary value of € 1,200,000.

These unique timekeepers are not only (materialistic) heavyweights, they are above all fine objets d'art. See for yourself!

GRIEB & BENZINGER, Rolls-Royce Motorcars and Revolution Magazine presented in Singapore the three heaviest platinum watches in the world valued at a combined 1,200,000 euros // US$ 1,500,000.

In an exclusive preview in Singapore, select guests from Rolls-Royce Motorcars and Revolution Magazine had the opportunity to marvel at two world firsts in the BLUE DANUBE (a unique skeletonized minute repeater split-seconds chronograph) and the BLUE WHIRLWIND (a unique tourbillon minute repeater) as well as the legendary BLUE SENSATION (the only split-seconds skeletonized regulator chronograph on the market ) by GRIEB & BENZINGER.

Each of these unique watches is based on a rare Patek Philippe caliber, which has been fully disassembled, modified and recreated in the typical style of GRIEB & BENZINGER.

More than twelve months of lavish restoration using classic horological crafts were invested in order to create these one-of-a-kind pieces in solid platinum cases with a combined total value of 1,200,000 euros / US$ 1,500,000.

Unforgettable highlights among these watches are the refined guilloché, hand-skeletonization and hand-engraving as well as the skeletonized Sterling silver dials with original Breguet frosted finish as only GRIEB & BENZINGER does.

Once again the company proves that the complicated masterpieces of GRIEB & BENZINGER are just as much objets d’art as simple watches.

Like the most desirable works of art, such as Leonardo da Vinci’s Mona Lisa or van Gogh’s Sunflowers, the timepieces by GRIEB & BENZINGER Platinum are one-of-a-kind, which will increase their collector’s value in the future. 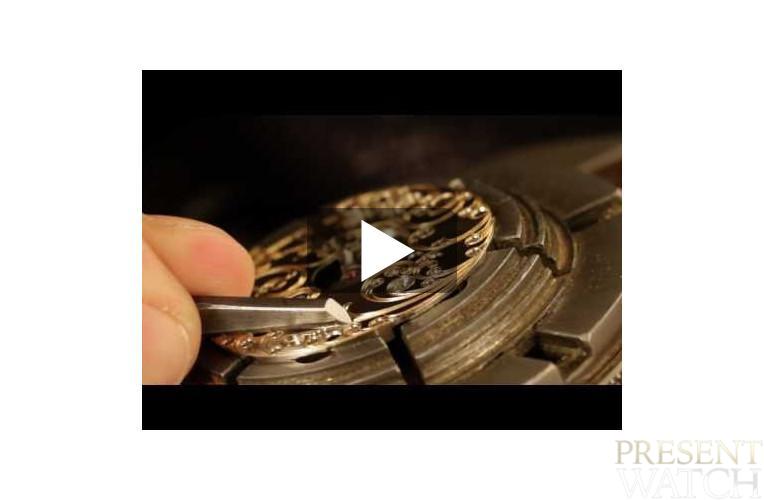 The 3 Masterpieces from Grieb & Benzinger 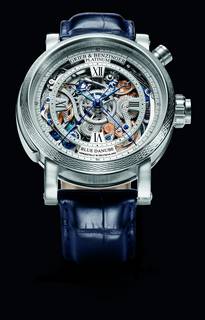 The BLUE DANUBE
A unique skeletonized minute repeater split-seconds chronograph powered by a base movement that was made in about 1890 and fully restored. Keeping in mind that this movement is already about 120 years old, the detailed restoration of the more than 400 components of this movement required intense attention.
The result, housed in a 43 mm-diameter solid platinum case, is doubtlessly a sensation and a tribute to historic watchmaking.
It retails for about 350,000 euros or US$450,000.
Read the full article about this luxury watch 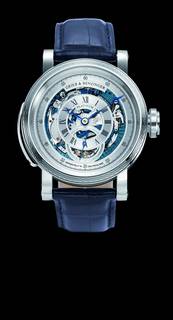 The BLUE WHIRLWIND
A unique tourbillon minute repeater based on the legendary Patek Philippe Caliber R TO 27 PS. This very same movement recently caused a giant sensation as it sold within a one-of-a-kind Patek Philippe Tourbillon Minute Repeater in stainless steel, which was donated to the ONLY WATCH charity auction in Monaco 2011.
The result was literally sensational: the hammer fell at 1.4 million Euros.
This is a really breathtaking timepiece as it is the world’s first watch powered by a visible tourbillon movement by Patek Philippe. In addition, a mysterious wheel visible on the back replaces the original gold drive wheel for the tourbillon. Who else would be brave enough to rework such a movement if not the folks at GRIEB & BENZINGER? With a value of 650,000 euros (about US$850,000) this was without any doubt a highlight for the watch connoisseurs present.
Read the full article about this luxury watch 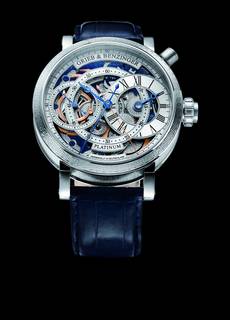 The BLUE SENSATION
The only split-seconds skeletonized regulator chronograph on the market with a base caliber that was manufactured in 1890 and fully restored and technically modified. With a 49-millimeter diameter and a total weight of 230 grams, it is the giant among these ultra-luxurious watches – though the most affordable one with a value of 200,000 euros (US$ 260,000).
These astounding timepieces are once more confirmation of GRIEB & BENZINGER’s detailed concept, which includes the masters’ the outstanding abilities to create such astonishing watches and the world’s heaviest platinum watches. In fact, this is not just restoration, it’s art at its finest. And only for one lucky collector worldwide.
Read the full article about this luxury watch